The Texas Department of Criminal Justice is changing its visitation, mail and commissary policies for Texas prison inmates in ways which seem arbitrary and unnecessary.

Let's start with visitation. TDCJ will begin running a drug-sniffing dog past all potential visitors, even children, and deny entry if the dogs alert. If a dog alerts twice, that person will be denied entry permanently.

The move is being billed as preventing contraband smuggling, but that doesn't justify it. For starters, nearly all the contraband smuggling is done by guards, and the biggest problem is the agency can't fire them because they wouldn't have enough people to staff the prisons.

Consider this example from the French Robertson Unit in Abilene last year:


A list obtained by KTXS from the Texas Department of Criminal Justice (TDCJ) said that 51 French Robertson Unit staff members were disciplined and one of those staff members was fired for bringing in contraband between January 1, 2013 to July 3, 2019, a six-and-a-half-year span.


The TDCJ also said that out of the 400 staff members at the French Robertson Unit, the number of contraband disciplines "are below average for disciplinary action and contraband issues as compared to the other 103 state prisons in Texas."

So one staffer out of 400 was fired for bringing in contraband to the prison, while 51 were allowed to continue working there. And that's "below average" for other units. So it takes a lot of chutzpah for TDCJ to blame families for contraband! That's absurd.

Anyway, why not just run the drug dog past inmates before they go back to their cell, or search them, for that matter, if need be. If you're trying to find contraband, the policy makes no sense.

For that matter, if a drug dog hits on a family member, why not search them for drugs instead of just sending them home? If they don't have drugs, let them visit. Narcotics dogs have very low hit rates (especially compared to, say, explosives-detecting dogs) and in general are about as reliable as a coin flip. But to just send folks away when they hit? It's like they want to discourage visitation more than they want to discover contraband.

Which brings me to another point, if TDCJ is going to use drug dogs in this way, they should record every alert and gather data on false positives. If dogs are alerting when there are no drugs, then you're not preventing contraband smuggling by using them and the whole ordeal is just a waste of time that discourages legitimate visitors.

And this part seems directly aimed at discouraging letters from children: No stickers or "artwork using paint, glitter, glue, or tape."

In general, "Offenders will only be allowed to receive mail from general correspondents on standard white paper. Mail received on colored, decorated, card stock, construction, linen, or cotton paper will be denied."

Part of this is aimed at getting inmates and families to use their JPay system, but that costs more and bleeds inmates and families financially. Phone rates were finally reduced in Texas, but JPay renews the practice of mulcting incarcerated people's families for the privilege of staying in communication with their loved ones.

If public safety were in any way a concern, maintenance of family ties being a key predictor of success after people leave prison, the agency would do everything in its power to encourage family members to stay in touch with inmates. But they're understaffed and see those communications as a chore they'd like to cut down on, not a central pillar of successful prisoner reentry.

Part of me wonders if this is a ham-handed public relations move, getting in front of major problems with guards smuggling contraband by making a big show of publicly blaming inmate families for it. But that assumes more sophistication and forethought than the agency, whose institutional culture remains stuck in the '90s, generally demonstrates.

Regardless, these changes seem punitive, ill-considered, and even a little mean-spirited. Either TDCJ should reconsider them or the Legislature should change them next year.

UPDATE: Our pal Keri Blakinger with the Marshall Project was in the room when these new policies were announced and forwarded me her notes from the event: 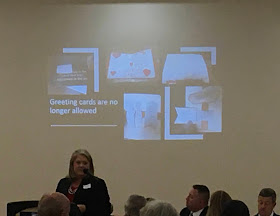 When I first heard about the greeting card ban a few weeks ago, I called the spokesman to confirm and he would not confirm even though officials had already begun telling people. TIFA had known, prisoners themselves had known for weeks, and people kept asking me questions yet - absurdly - TDCJ would not confirm to me. So I showed up at the conference on Saturday in hopes of getting on-the-record confirmation. Here's a sampling of what was said:

The announcement formed the bulk of an hour-long presentation by CID Director Lorie Davis, who kicked off by telling the pretty-full room, "We gotta keep people safe and we gotta help people change."

(This seems to me often at odds with what actually happens but ok.)

"It’s no secret that drugs are bad choices, drugs are one of the reasons why we have the population that we do," she said. "It’s a bad choice to do drugs in the penitentiary."

She said, "We’re committed to fighting this battle," and added, "It’s great that the recidivism rate has come down 10 percent in 10 years that’s great that’s cool but it’s not enough." (unclear not enough what, recidvism decrease or positive action from the agency)

One of the drugs she railed against coming in was suboxone, which is used to treat opioid addiction. It is easy to dose mail with the water-soluble strips - but it is not something people overdose on and is considered the "gold standard of care."

Despite banning glitter, colored paper and various other things, Davis specified that crayons are still allowed: "I don’t wanna take away a kid’s ability to use crayons and color their mom and dad a picture. That’s important." She stressed the value of staying in touch through mail, saying, "Let's put down our telephones and let's write some cards together." (She meant collectively, not literally offering to chill out with families and write cards, of course.*)

She detailed the creation of a new security precaution indicator (CD) for anyone who catches a disciplinary case relating to contraband (including simply refusing a UA). She says that this won't affect good time, just housing assignments and job assignments - like, those accused of smuggling won't be given janitor jobs.

Anecdotally, what I'm hearing is that the SSIs (porter/janitor-type jobs) are just moving these things around the unit, not necessarily the ones bringing them in - that is, according to all the jail mail I get, largely the guards.

She closed by freaking people out with news of the addition of video visitation at some units. Plans for this add-on were announced in 2018 when they lowered the phone rates. She reassured everyone it would not replace in-person visitation, and was just part of the phone deal. These are the units that will have it: Clements Connally Crain Michael Stiles Wynne Jester Garza Hutchins Montford Travis and Sanchez.

TBH, families still seemed freaked out about visitation - and generally - despite those assurances. She fielded a peppering of worried questions and by the time she closed with a very emotion-laden "drugs are bad," everyone seemed quite concerned.

* Grits' note: She also didn't mean writing cards, which she just announced were banned.
Gritsforbreakfast at 5:56 AM
Share