A chance to expand police oversight: Why Texas should begin charging cops and jailers licensure fees

Readers may recall Grits recommended over the summer that the agency licensing Texas peace officers, the Texas Commission on Law Enforcement (TCOLE), begin charging licensing fees to Texas cops and jailers. The idea was that they could use the "extra" money to expand their oversight role.

But a new document from the Legislative Budget Board shows that TCOLE may need to begin charging licensure fees just to keep its funding at current levels. Here's why:

Since 2004, TCOLE has funded most of its activities using General Revenue–Dedicated Funds from Account No. 116, which is composed of consolidated court fees collected pursuant to the Texas Local Government Code, Section 133.102. Currently, multiple agencies spend funds from Account No. 116, including TCOLE, the Comptroller of Public Accounts, and the Department of Public Safety. In addition, employee benefits are paid from this fund. The amount of revenue collected has been decreasing for at least the past 15 fiscal years.

Check out this chart showing the rate at which this account has been outspending intake: 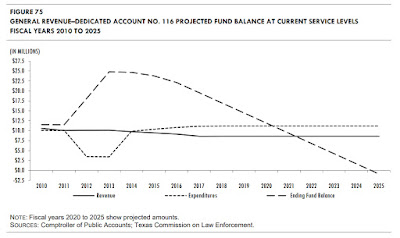 So the account balance is scheduled to drop below expenditures by the end of the next biennium, meaning TCOLE and other agencies funded by Account 116 must turn elsewhere for funding. Or as LBB put it, "Without replacement, the loss of this funding would halt the majority of TCOLE operations." In that light, for TCOLE, charging licensure fees makes loads of sense.

LBB suggested four options for raising revenue for Account 116, but none of them involved licensure fees. That's a mistake not even to consider it. The people who license doctors, lawyers, plumbers, etc., are all financed via licensing fees, why not police and jailers?

Grits wanted more money for the agency to facilitate more oversight and compliance functions. E.g., in FY 2019, LBB reported, TCOLE audited 770 agencies for "law and rule compliance" and found "deficiencies" in 349 of them. It's great that they're catching violations after the fact, but that's an awfully high rate of deficient audits.

Moreover, Texas is one of only a handful of states where the peace-officer licensing agency can't revoke licenses of officers for serious misconduct. Here, we require them to be convicted of a felony first, which almost never happens. But a decertification program would require resources, particularly for attorneys, and licensure fees are the most obvious way to pay for them.

At the moment, TCOLE's budget runs around $4 million per year. Assuming a) a 95% payment rate, and b) licensure fee rates of $50/year for police, $40/year for 911 operators, and $30/year for jailers, Grits estimates about $4.9 million could be generated. One could fiddle with those fee amounts to adjust that figure up or down.

There are also nearly 3,000 agencies authorized to provide training who could also be asked to pay for the privilege. At $500 per year, ~$1.4 million could be generated from that cohort.

If Texas must begin charging licensing fees, anyway, it should do so at a level that lets the state expand oversight functions, not just keep up the status quo.