With one, unanswered question, Chris Wallace debunked weeks of Texas media coverage on Austin, Fort Worth, crime trends, and partisanship

Grits can hardly convey my delight that, during the mostly unwatchable Presidential debate, Fort Worth Mayor Betsy Price found herself hoisted on her own petard, with moderator Chris Wallace questioning whether rising murder rates in cities with Republican mayors like Fort Worth and Tulsa show that crime isn't a partisan issue.

Trump ignored the question's premise, doubled down, and blamed Democrats, while Biden never returned to the Fort Worth example. But Mayor Price says her phone began to blow up almost immediately. She responded the next day by distancing herself from the premise, championed by President Trump and Governor Greg Abbott, that crime is a partisan concern. "Not a party issue," she declared. "It just isn't. We always say potholes don't care what party you are. Crime certainly doesn't care what party you are."

Well, gee, Mayor, it would have been great if you'd been so non-partisan and pot-holish when you sat next to Governor Abbott while he demagogued against the Austin City Council, whose citizens are murdered at significantly lower rates than Fort Worth's. Don't blame the media for picking up on that: What's good for the goose is good for the gander. Price released this data comparing murder rates in Texas cities: 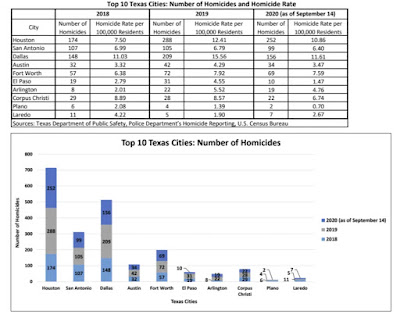 By Grits' calculation, if Austin's murder rate this year were as high as Fort Worth's, we'd had seen 74 murders instead of 34. So why hold a press conference in Fort Worth to tell Austin how to keep safe?
Texas reporters didn't think to ask the Governor that question, but in retrospect, it was a missed opportunity. Chris Wallace saw Republicans' staging of Fort Worth as an alternative to Austin and just asked the obvious question: What's so great about their outcomes? Do the differences between those cities really stem from the partisan leanings of their mayors, or is there more going on?
As soon as the question is even posed in an evidence-based way, the conversation seems silly. But that's not how the Texas press has been approaching Governor Abbott's broadsides against the Austin City Council. Like Mayor Price, they've been egging him on, repeating the most ungenerous characterizations of Austin's budget proposal while ignoring the details of what was done.
Actual cuts were 4.6%, or just a little more than the 4% cut at DPS in the 2017 budget Governor Abbott signed. Unlike in Austin, though, cuts at DPS resulted in both trooper and civilian layoffs. By contrast, Austin laid off no officers at all. But Texas reporters built out an entire story architecture around Gov. Abbott's false premise that Austin's small-time budget cuts made the city less safe.
All it took was a national journalist casting the same, ungenerous light on Fort Worth that Gov. Abbott applied to Austin for Mayor Price to backpedal from a partisan interpretation.
To be clear, it was always a pile of horse hockey to blame crime trends on partisan affiliation, or for that matter Austin's modest budget cut to the police department. What's depressing to me is it too often takes a national journalist intervening to examine Texas leaders' talking points and observe, "The Emperor wears no clothes." Only the Texas Tribune had reported this as essentially a campaign ploy as opposed to a serious policy proposal.  Other Texas reporters should have learned that lesson by now. (UPDATE: A commenter pointed out Chris Hooks at Texas Monthly also emphasized the politicized nature of the Governor's complaints.)
Gritsforbreakfast at 9:54 AM
Share