How should journalists cover blatantly false or misleading statements from self-interested pols? 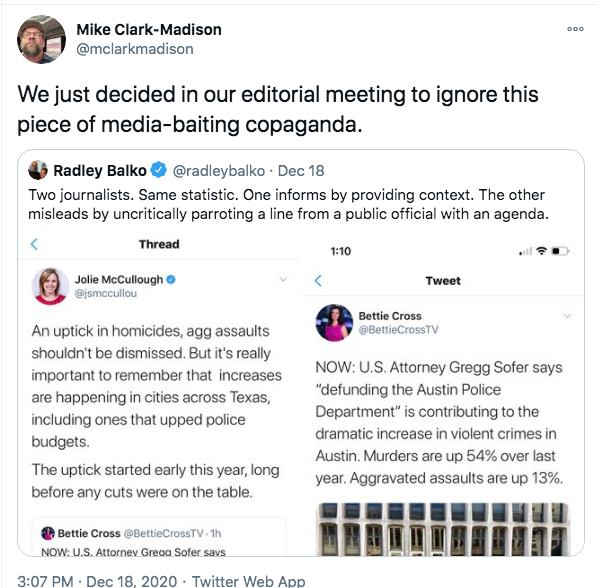 Last week, Grits considered responding to Austin-bashing press conference by the US Attorney for Texas' Western District, but the phony outrage was so tired and lame I couldn't muster the energy. Luckily, at least some in the Austin press corps - notably  Jolie McCullough at the Texas Tribune and Mike Clark Madison at the Austin Chronicle - chose either to debunk the falsehoods or just not to take the bait.

It's all been so silly. The murder increase in Fort Worth has been larger than in Austin, and they started with many more murders to begin with. But Austin gets special federal focus?

I don't blame Mike Clark Madison for choosing to ignore this piece of "copaganda" from a Trump Administration official who won't have a job in a month. But the Texas Tribune's McCullough took the opposite tack, aiming to debunk the misinformation instead:

“When you defund the police, relax enforcement of existing criminal law, and release repeat offenders and violent criminals into our streets, increased violence is exactly what you can expect,” Gregg Sofer, a newly appointed U.S attorney for the Western District of Texas, said in a statement after a press conference.

Austin police, like those in Fort Worth, recently stopped citing and arresting people for possessing small amounts of marijuana. The decisions arose from the state Legislature's legalization of hemp in 2019, which made it difficult for law enforcement officers to distinguish between legal and illegal cannabis. Recent decisions by several Texas counties to release more people from jail during the pandemic also brought backlash from the governor.

Last month, Austin Police Lt. Jeff Greenwalt addressed the rise in homicides at a press conference, but he said violent crimes detectives were still in the same shape under the new budget, “if not better.” He said given the city’s safe standing among other cities, he wasn’t yet concerned with the rise in some crimes. It’s hard to predict trends off of a small amount of data.

“We saw a rise in violent crime in the very early months of 2020, before the reimagining and the defunding conversations came up,” Greenwalt said. “I don’t think that we can say that the numbers in 2020 are reflective of that issue.”

Which is the right approach when public officials spread misinformation, ignore it or debunk it? I'd suggest both, in that order. Ignore it today, debunk it tomorrow.

Journalists should avoid reporting false statements from press events like the US Attorney's, even to debunk them, at least in the news cycle or two after they're released. The false information is being timed for a reason. As a journalist, don't be a tool for spreading it unless you fully understand what it is. Later, the information can and should be contextualized and debunked, with falsehoods a) clearly identified and b) the main point of the story.

In my imaginary world of journalism best practices, when Greg Abbott held a press conference in Fort Worth to say they were doing criminal justice right compared to Austin, pointing to the rising murder rate in the capital while ignoring that Fort Worth's was much higher, reporters would have taken note of the event but not immediately written about it. After all, it's a false statement; it has no news value.

What does have news value is the story, "Governor Makes False Statement." But that story takes research and context to write, and is more appropriate several days hence.

Same goes for the US Attorney. Mike and Jolie both were right. It's not good to promote false memes, and it's also good to debunk them. It's not at all obvious which approach is right and puts the reporter in the position of a baserunner caught in a rundown between second and third: No great options.

While I realize many people believe all politicians lie, things are objectively different now. The dam has broken in the last four years, and especially in 2020. The Trump presidency demonstrated what a bind it puts journalists in when politicians are willing to openly flaunt facts. Now, state and local reporters face the same tactics and the same hard decisions about how to cover them. Ignore them? Debunk them? Report "both sides"? Should they characterize false representations as "lies"? "Mistakes"? "Spin"? "Wishful thinking"? "Blatant falsehoods"? If falsehoods further a political agenda, when should motives be impugned? These are not easy or obvious questions.

Eight years ago, Grits wrote a short essay titled "Ten Maxims for Making Journalism Relevant in the 21st Century." In retrospect it holds up well to the post-Trumpian era as a guide for how to approach these and related questions. Those interested should give it a read.