For reasons Grits fails to understand, neither reporters, academics, nor independent researchers have mined Texas' extensive "racial profiling" dataset extensively, though it's one of the most robust quantitative treasure troves of data on police-traffic stops of which I'm aware, anywhere. To a large extent, new data reported after 2017's Sandra Bland Act (we were given data collection in lieu of a policy ban on Class C arrests) gave us a big-picture overview of what goes on at Texas traffic stops for the first time at a level of detail even experts hadn't seen before.

Your correspondent needed to pull some data this morning for other purposes, so let's dump some interesting, previously un-reported tidbits here.

The Scope of Texas Traffic Enforcement

About 3.9 million of those stops, roughly 40%, resulted in citations. (For reasons no one fully understands, citation totals have been falling for more than a decade.)

A majority of those arrests (168,951) related to penal-code violations. In many cases, officers discovered contraband that triggered these arrests. Seventy percent of all contraband found was drugs or drug paraphernalia.

Roughly a quarter of arrests at traffic stops (73,911) were for outstanding warrants. These are folks truly suffering from the Debtors Prison Blues:

In addition, 21% of arrests at traffic stops were for Class C misdemeanors (64,100), mostly moving violations and a few arrests for breaking municipal ordinances. These are the arrests that would be eliminated under the George Floyd Act (and should have already been eliminated: similar language was pulled out of the Sandra Bland Act before it passed in 2017). Here's a breakdown of arrests by type: 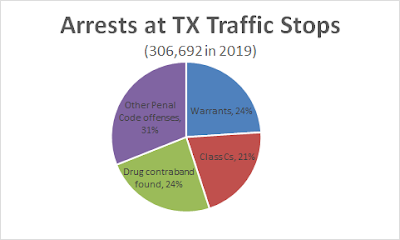 Police reported using force at .6% of stops, or 60,034 total times in 2019, but use-of-force rates by department varied widely.

Why Do We Search?

In aggregate, Texas cops conducted searches at about one in 20 traffic stops statewide (5.1%), discovering contraband a bit more than a third of the time (34.5% of searches resulted in contraband "hits."). Roughly a quarter of all traffic-stop searches in 2019 (26%) were conducted based on "consent searches" in which the driver gave the officer consent to search. Another 35.8% happened because the officer observed probable cause; and about a third were "inventory searches" or "searches incident to arrest."

This data from the Sandra Bland Act casts new light on what previously was a largely opaque process illuminated only occasionally and momentarily by the release of bodycam video or civil litigation. But the plural of anecdote isn't "data" and until recently, we didn't have department-level numbers to provide insight into local, much less statewide traffic-enforcement practices.

As I look at this heretofore-unreported data, it reinforces the key opportunities for decarceral legislation aimed at traffic stops: The Sandra Bland/George Floyd Act language would eliminate 21% of traffic-stop arrests. Reducing the number of warrants under the Omnibase program would shrink another sizable chunk.

Finally, if drugs make up 70% of contraband found, Grits would expect most of that to be marijuana. So drug-related penal-code arrests could also go down when we see 2020 data because of the Great Texas Hemp Hiatus. (Grits would prefer to see marijuana straight-up legalized, but even tamping down arrests via the new hemp law is an improvement over prior practices.)

Traffic stops are a major, front-end driver of county jail admissions. So anything that reduces how often they result in incarceration also reduces pressure on local taxpayers and avoids adding people to the jailhouse petri dish who might be exposed to COVID.

The newest round of "Sandra Bland" data comes out March 1st, and this time, problems with racial categorizations are supposed to have been fixed. So reporters and researchers should mark that date on their calendar (some agencies have already begun to submit) and set aside time for a deeper dive when that information becomes available. There's a lot of good stuff there.

*A handful of small agencies reported that they arrested someone at every traffic stop. This was clearly an error and those agencies' arrest totals were excluded from this calculation.